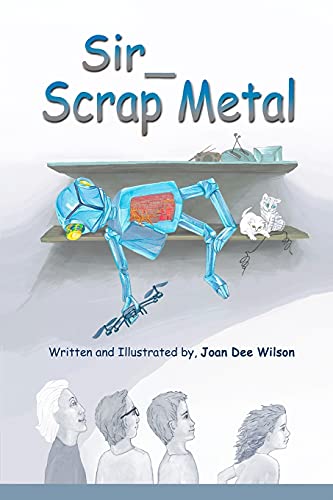 See it at Abebooks
See it

Language: English. Brand new Book. Young sister, Dree, saves a battered and broken robot from being recycled by a dubious store owner, Mr Fitch while on vacation with her two older brothers at Grandma's cottage near Lake Superior. Her new companion turns out to be a very sophisticated robot, Sir_12.80, used to track illegal animal smuggling baring an inscription Sir_12.80. It is being sought for its black box data by its creator, Agent Rouso, after it was thrown from a helicopter and dragged along the rocky shore by a big slobbery dog. Renamed Sir Scrap Metal by Dree, and restored via solar energy the little robot wants to be retired from service and enjoy this family who adopted it. Dree wants a friend, Grandma wants a companion; her brothers, Mike and Brady want a summer to fly their new drone, Seeker, to track a local bird menace. But, when Dree's kittens get lost, her brothers are beckoned to the rescue them, monitored by Sir until their mission becomes perilous. Dree's capable reasoning proves to succeed as she and Sir team up to rescue, kittens and brothers, but unable to save their drone from being attacked by birds and stolen by ole Mr. Fitch who vows to get the robot back too. it's Grandma who takes issue with the notorious Mr. Fitch just as Rouso finds him out. Family adventure and comradery with nature and technical imaginative elements.