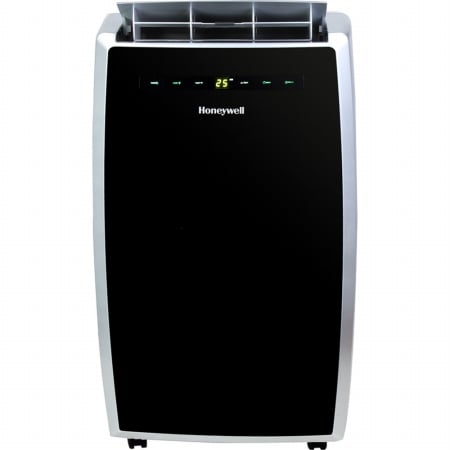 See it at UnbeatableSale
See it

See it at Office Depot Officemax
See it

See it at Best Buy
See it

See it at Zoro
See it

See it at Rc Willey
See it

See it at The Home Depot
See it

See it at Walmart
See it

See it at Overstock.com
See it

The Honeywell MN Series 10,000 BTU portable air conditioner has a sleek, modern design cooling and dehumidifying areas up to 350 square feet. With 3-in-1 technology, this portable air conditioner delivers optimum cooling and dehumidification. It also has a fan-only function. The full-function remote control allows you to operate each feature from across the room. Unlike a fixed AC, this unit requires no permanent installation and four caster wheels provide easy mobility between areas. Plus, the auto-evaporation system allows for hours of continuous operation with no water to drain or no bucket to empty. This model comes with everything needed including a flexible exhaust hose and an easy-to-install window venting kit. The window vent can be removed when the unit is not in use. Available for Online Purchase Only. Assembly required. Not eligible for 5 Star Express Delivery. 10,000 BTU portable air conditioner cools areas up to 350 sq. ft. No bucket, no-drip design uses auto-evaporation system

Great unit
★★★★★
We compared units from 4 different places. Read all the reviews. This is a great unit. It is fairly quiet. I was expecting it to be noisier from some of the reviews. But it is not that noisy at all. My fans are just as noisy. I would recommend this unit for anyone looking for a portable air conditioner.
By Nancy on 2020-07-09

Great portable A/C unit
★★★★★
We now have two units, one in each bedroom. This allows us to not run the house A/C during the day, unless it is very hot and humid, but still have cool bedrooms at night for sleeping. Runs off a standard electrical outlet and is easy to set the exhaust in a window. Also easy to move with the wheels.
By Dean on 2020-07-10

Works great, keep our room nice and cold!
★★★★★
A lot larger than what I expected (about the size of a mini fridge) however, this works FANTASTIC. My room is freezing at night and I usually set the temperature on the AC to 65. It turns on and off rotating between a low fan noise and high fan noise signaling when the cooling session begins. If loud ACs bother you I wouldn't recommend. I am definitely addicted to having a fan on and white noise when I sleep so I find the sound soothing. My bedroom is 12x16, and sometimes I leave my door open and it cools the hallway and family room very well too. There's three different settings (AC, fan, and humidifier) but I mainly just use the AC portion. Awesome that it has a set timer too so it will turn off when I go to work or while I'm sleeping. Would definitely recommend it for the price.
By D.L.Molnar on 2019-03-13

Ready for Summer! Great, strong A/C unit
★★★★
This is a great unit. I'm only giving it a 4 because it's a bit large and somewhat loud. Ordinarily, I wouldn't mind the loud, but during quarantine, I've had to turn it off when I'm taking Zoom calls, because I find it distracting. But usually, a bit of sound is a plus, as it drowns out NYC street noise. I previously had a compact floor a/c, and it worked fairly well, but after 2 or 3 years, it really didn't cool well on very hot days; which made it less efficient. however, it was a big space saver. While the Honeywell isn't enormous, it's pretty sizable, so for a smallish living room, it certainly makes its presence known. But it works SO WELL--a very powerful cold, dry breeze that cools a roughly 300 sq ft room very quickly, and even extends some coolness into the hallway. With this and a small window unit in my bedroom, I am totally ready for summer. Set up was quick and I like how cleanly the hose connects to the window guard. I can see where the hose could be longer, but I have a fairly small space and keep it close to the window, so this isn't an issue for me. The unit itself is sturdy and attractive. Nice modern design. Hoping it holds me in good stead, as it was rather expensive. But I'm glad I made the upgrade. It cools so well, I may actually save money down the road in utility bills.
By smoggrocks on 2020-06-21

Money well spent
★★★★
I purchased this for my bedroom, as I only have a wall unit, and the bedroom didn't get cool enough for restful sleep at night. You know, tossing and turning, waking up so hot it was difficult to get back to sleep. Since I installed this it's been wonderful! I have it a few feet from the bed, blowing at it, and it has helped tremendously with sleep quality. Yes, it does have a noise, but it's just like a fan, and I personally never notice the compressor shutting off and on. The three complaints I'd have are: the light. The display is digital, and extremely bright! I don't think there's anyway it needs to be that bright. In a light room it's fine, but at night it is like having a nightlight by you. So I had to cover it with a piece of foil hanging down, which mutes the light, but now the remote won't work, must be the sensor is covered up. So that's frustrating. Also, the directions said to use the plastic pegs to secure the window insert in the width that you need it. Well for some reason mine only came with one peg. It's also not long enough, and I do wish that we'd be given the option to order an accessory kit in the beginning (with an extra length of window adapter, more pegs, etc.). I am using tape now, but it's just a temporary fix. Lastly, the hose needed to be secured both to a connector that attaches to the window adapter, and to a connector that attaches to the back of the AC unit. Well, the window one was easy, in fact super easy. However, the one that attaches to the back of the machine was EXTREMELY difficult!! I struggled, and fought with it for I bet a half-hour! Was crazy. Finally had to use my fingernail to pull a bit of the hose out, where it was impeding movement (keeping the adapter from twisting on). Still don't think I have it 100%, but it's good enough now. So if Honeywell could make that easier that would be wonderful! I do think the unit itself is wonderful though, and having said all that, I would definitely buy it again! I am hoping/expecting that it will be a lasting purchase, with the Honeywell name!
By trjs63 on 2015-06-12

Medium to small room solution
★★★★
Pros: Other reviewers helped me select this unit. I added this to a bedroom at the far end of my built-in HVAC ducting in Phoenix. This add on room didn't get ample flow . The unit was easy to setup compared to a normal in window unit. I have the exhaust and included mounting bracket in a sliding window with a dowel and after market lock to keep it tight to my added weather striping. I also added weather striping to the gap between the open glass and window frame. IMHO, the unit is no more noisy than the average motel below window conditioners. I should know: I average 2 to 3 nights a week one the road in all types of hotels/ motels. It sure beats turning on my second of 5 ton Tranes just to force more air to that far end of the house. In Phoenix I only need 76-78 indoor temps to feel comfortable and it does that on High fan speed mid afternoon, 112 outdoors. The room is 15 by 16 by 8. It's a very clean looking white robot. Cons: Not much of a con: The exhaust duct gets rather hot.That's to be expected! I am not in sales. I did some research on these units. You will definitely need to cover/ insulate the exhaust ducting. I'm lazy and ordered the following ducting sleeve. COOL-AIDE Exhaust Hose Insulator. A great demo video on there website. It matches this unit's white lines perfectly. Enjoy the dog days of summer.
By Ken on 2018-06-17

Disappointed
★
Machine is LOUD ! Hose that comes with it is about 3 feet too short. Disappointed that machine has to be located right up next to the window, I would prefer to locate the machine further out into the room. Unit is too expensive for the little amount that it cools my bedroom. I paid $400 for the unit.
By RoseMary on 2016-06-02

Above reviews were provided by Walmart.com

Great for cooling a large bedroom.
★★★★★
I have a portable AC in each of my rooms during summer months and store them when they are not needed. When I installed this, I made sure I completely insulated the hose and window adapter. If you skip this, this will not work very well. I really love the cooling power once the insulation has been installed. It cools my large bedroom very quickly and maintains it. The compressor only needs to turn on a few times at night which saves me money. I love it.
By Dr. Who on 2013-05-26

Works very well for me
★★★★★
I got this air conditioner to help cool off my house. It only has a swamp cooler and it just doesn't cool the house enough. I have an 8000 Btu portable in my bedroom and it works great but I needed something to cool the living room down better. This one is 10,000 btu and does a great job cooling it down. It was easy to set up and it was blowing cold in no time at all. It comes with a window kit to exaust the heat and is easy to install. It also comes with a remote control and can be set to different speeds and you can run just the fan if you want. Its a good choice for a portable Ac unit and im pleased with it.
By This Old Man on 2013-05-25

Extremely loud. Impossible to sleep with this in bedroom.
★★★
I wanted to keep this machine. It looks great. It's very easy to assemble, and it cools down the room quickly. But honestly, it is my worst nightmare. It's so LOUD I cannot sleep with this thing running in my room. Every time the compressor kicks on, a lout grinding sound startles me from sleep. It doesn't have a sleep mode, and the timer doesn't work. I'm returning this item and buying a pedestal fan. Well, the return shipping cost more than the fan.
By Shaw Lu on 2018-06-21

Cools air but makes room stuffy and stale
★★★
The machine did an effective job in cooling but the air feels so stale after about 45 minutes. I ended up running a fan while the AC was running and it helped a little but it wasn't worth it for me so I returned it.
By M. Ester on 2018-06-20

Faulty brand new unit. Returned.
★
Hassle. Brand new and would not work. Flashing red light. Had to box it up to return. Amazon was very good about the return. Looking to find a different brand.
By Consumer on 2018-06-20

CHECK FOR FREON LEAK
★
The damn thing was leaking freon and the freon was everywhere on the air filter and inside the drainage for the dehumidifier.
By Christopher Gonzales on 2018-06-20

Broken pieces
★★★
Came with a few broken pieces and a few missing pieces to set it up in the window. It seems to only be for windows that open horizontally as well
By Megan on 2018-06-20

Above reviews were provided by Amazon.com